As part of a joint venture, CE’s client signed a contract with a Transportation Authority to design and build the new bridge over a major river replacing the existing infrastructure originally constructed in 1938.

The company’s areas of expertise include office buildings, industrial plants, single and multifamily residences, hospitals, bridges, and highways. The firm has domain expertise in large-scale public works projects, including bridges and transportation infrastructure.

Connectivity at a remote, hard-to-reach jobsite.

As one of the largest construction and property developers worldwide, the company provides building, financing, development, and management services for commercial, residential, and civic projects. The company’s areas of expertise include office buildings, industrial plants, single and multifamily residences, hospitals, bridges, and highways. The firm has domain expertise in large-scale public works projects, including bridges and transportation infrastructure.

As part of a joint venture, CE’s client worked with another large general contractor, civil engineering firm, and signed a government contract with a state along the eastern seaboard of the United States. The owner/developer was the Department of Transportation Authority who commissioned the joint venture to design and build the new bridge over a major river replacing the existing infrastructure originally constructed in 1938.

The customer’s share of the contract was worth USD $301 M and involved replacing the existing two-lane bridge which connects Newburg, Maryland, and Dahlgren, Virginia, with a new bridge spanning 1.9 miles (3 kilometers). The newly built span was designed as a four-lane structure and included roadway realignment with about a half mile on either side of the bridge. It also utilized an All-Electronic Tolling (AET) system.

Protecting the Chesapeake Bay watershed presented several environmental considerations. The jobsite offered several challenges, not the least of which is spanning almost 2 miles of open water in a watershed with strong currents and significant tidal flows. Additionally, a major part of the initiative was the green decommissioning of the existing bridge in an environmentally friendly way that protected the fragile ecosystem in the watershed. The plan was to utilize a “reef approach” whereby the existing bridge is demolished and used to create an artificial reef.

As the corporate IT team planned for construction to begin in March 2020, it became apparent that this was no ordinary jobsite. With several square miles to cover and much of the work to be done on the water, the use of tugs and barges was a major consideration. These vessels would be used for everything from locating pilings to

ferrying building materials and would need to maintain ship-to-shore communication to transmit important data in real-time.

This was important for jobsite safety, and to enable the many cloud-based construction-tech applications used to facilitate worker productivity on the jobsite and adhere to design specifications. Furthermore, tugs were central to the environmentally sensitive demolition of the existing structure. This included the removal of debris and support of land-based crews. Any downtime meant significant unbudgeted costs would be incurred (e.g., hourly vessel operation costs).

ConstructEdge was consulted to support the corporate IT team to help design a broadband jobsite solution that would allow tugboats and barges to stay connected with field teams throughout the lifecycle of the project while it scaled in size and culminated in the green decommission and construction of the new bridge.

As the initial jobsite was assessed, corporate IT faced a series of operational challenges with the need for a last-mile solution to bring broadband internet to the remote jobsite location as well as providing connectivity with trailers and extending out to the field.

As is the case with many remote, hard-to-reach locations, the customer’s initial foray into identifying retail providers who could bring fiber to the jobsite location came up empty. There were simply no internet providers who had any existing infrastructure near enough to the jobsite to deliver service. Compounding this was the fact the U.S. military operates an airbase in close proximity, creating frequency and airspace restrictions.

Even more important was designing a trailer and field connectivity solution that could scale as the project grew. In this instance, the field was a 2-mile wide stretch of the Potomac River that encompassed land, water, and moving vessels. As the jobsite scaled with the construction of the bridge replacement, trailer cities on both sides of the river were sure to move requiring considerations for maintaining line of site communication between tugs and trailers. 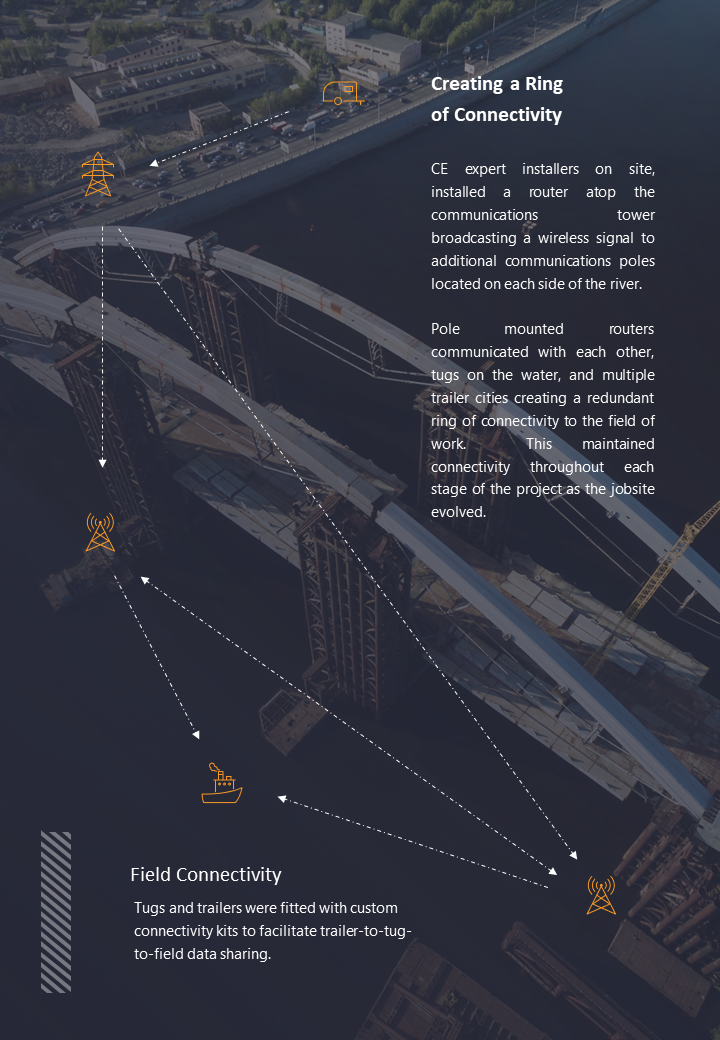 ConstructEdge utilized all of its turn-key, end-to-end jobsite capabilities to build a ring of connectivity on the project including Last Mile, Trailer Connectivity, and Field Connectivity solutions.  The first order of business was to identify a source of high-speed fiber to bring an internet connection to the remote, hard-to-reach location. ConstructEdge tapped into its network of local exchange level ISPs available in its M360 platform and was able to identify a commercial provider who could bring fiber to the location and provide enough bandwidth to service the jobsite.

Custom Connectivity for Tugs and Trailers

To maintain uniformity on microwave line-of-sight technology between moving vessels and relocating construction trailers, ConstructEdge designed and assembled a custom connectivity kit which included a receiving dish, ruggedized connex box, DCQ 100 Wi-Fi, and an Omnidirectional Receiving Antenna. Each tug, barge, and trailer was fitted with a kit to provide ship-to-shore and trailer-to-trailer data sharing.

Mitigating the Unintended Consequences of an Evolving Jobsite

Midway through the project, the trailer city began to relocate to different parts of the jobsite causing unintended consequences. Because the new location was at a higher elevation, the microwave line-of-site technology was no longer able to reach tugs on the river below.  ConstructEdge again reached into its bag of tricks and, through the network within its M360 platform, was able to secure access to a nearby government-owned communications tower. After navigating the requirements from design engineers, and some regulatory red tape, use of the tower was approved by the state government.

The CE expert installers on site installed a router atop the communications tower broadcasting a wireless signal to additional communications poles located on each side of the river. Pole-mounted routers communicated with each other, tugs on the water, and multiple trailer cities, creating a redundant ring of connectivity to the field of work. This maintained connectivity throughout each stage of the project as the jobsite evolved.

Blanketing the field of work with redundancy meant that each boat could share real-time data and communicate with crews on shore. This was critical since cellular service was intermittent on the water and the lack of reliable data sharing created a safety hazard.

This also allowed for massive productivity gains since teams wouldn’t have to come back to shore to share or get information. The real dollar savings realized from eliminating vessel down time were significant enough themselves to show a financial return on the network investment.

There is no jobsite challenge that a well-implemented field-first technology approach cannot overcome. Beginning with field connectivity in mind facilitated the software and cloud-based apps used to manage this massive design-build based project. ConstructEdge’s unique approach to Field Connectivity in the construction industry is important because large infrastructure projects are increasingly being run under a design-build approach.

The chief project manager on the project quoted in a leading trade publication said, “One of the main benefits it brings is huge time savings. On a typical design-bid-build, the owner would have to go out and price the project and negotiate a contract after it’s been designed. With design-build you can be designing at the same time you’re building.”